England’s fine football form is the real talk of the week; England 2 – Denmark 1. Come on England! 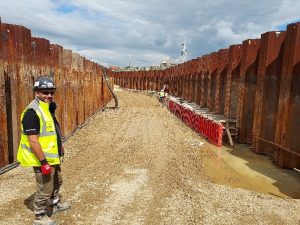 On Thursday we completed formwork for the concrete wall that ties the steel pile wall with the existing historic walls near the Saluting Platform. The wooden structure creates a mould for concrete to be poured into and then set into the correct position. We are looking forward to Friday for the pour!

We know we say the same every week for weeks regarding the bay working, but it really is a case of repeating digging out, attaching beams and blinding and then backfilling.  The waling beam on the rear of the front pile line provides stability and support to the steel piles, whilst the toe beam on the front of the rear pile line provides the same stability as well as a base for the precast vertical wall.  Good news though – we are on bay six of eight so this section of work is nearly complete. 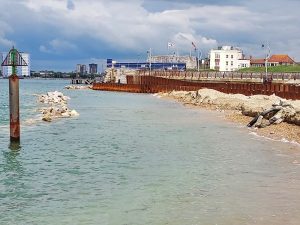 The shoreline looks different to the west this week with the water coming up to the front pile line. The temporary work platform that we created way back in the Winter has been partly removed to create space for placing the anorthosite rocks that are used for the rock revetment.  The rocks will act as a defence against flooding by dissipating the force and energy from waves.

On the eastern side of the Spur Redoubt closer to Clarence Pier, the drainage work for the new wider promenade has been completed.  Investigations are also taking place to check the underlying ground before further promenade construction work commences. 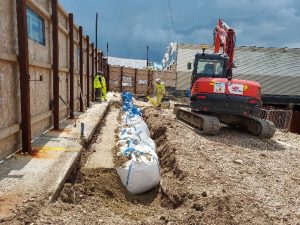 We will be working this weekend, moving rocks for the start of the rock revetment to the west of Spur Redoubt. Work is likely to continue over several weekends as construction of the western sea defences ramps up. We apologise for any inconvenience caused, and appreciate your patience as we build these crucial new sea defences.