We have now cordoned off the works area around Southsea Castle, with a footpath diversion in place on the landward side in front of the Blue Reef, D-Day museum and the Pyramids, running alongside Clarence Esplanade.

There is still access to the Rock Gardens, Castle Field and the ramparts around Southsea Castle for walking. Local businesses are open as usual throughout the works. 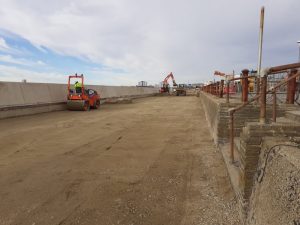 Between a rock and a hard place

This week we have really pushed progress on building up, or backfilling of, the areas which will be underneath the new promenade on both the west and the east of the Spur Redoubt.  Maintaining our commitment to sustainability and our zero waste target, we used rock and stone which we have removed from the former sea defences.  By processing these materials, we are recycling as much as we possibly can which saves on lorry movements and CO2 emissions, not to mention reducing traffic of large vehicles in the area. 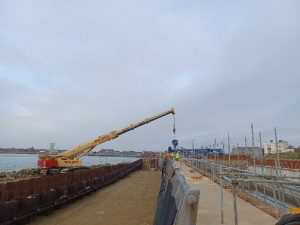 Why do you build me up, buttercup…

We have been building up the western end egress steps and the new capping beam (beam that sits on top of a wall to provide support) on the moat side of the promenade wall. There have been concrete pours aplenty this week – check out the photo to see how the poured concrete settles around the ‘re-bar’, or steel reinforcements. 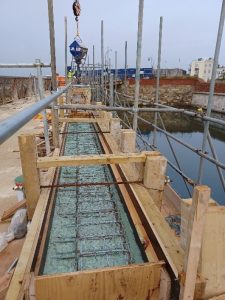