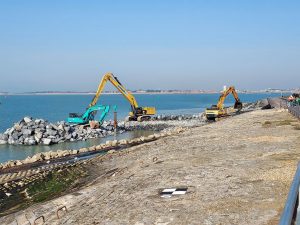 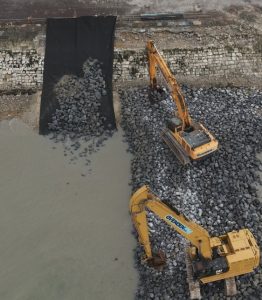 Our team from Ovenden Earthmoving is working closely with Boskalis Westminster to move the granite rock armour into position in the new defence that stretches 25m out to sea.

We are using two size grades of rock to create the revetment (sloped structure) at Southsea Castle.  We are placing ‘core’ rock on top of the geotextile (the black material seen in the photo to the left).  This is best described as a base of smaller rocks, each one weighing between 60 and 300 kilograms. On top of this, two layers of larger rock armour are placed and interlocked. The grading ranges from 1-3 tonnes with some on the extreme upper limit weighing up to 4 tonnes (for some context, that’s about the weight of an average Indian elephant!).

The tide is high

Interested in the tidal movements that influence the timing of our rock works? Check out the Portsmouth tide times here. 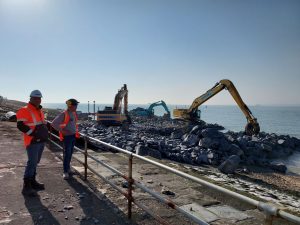