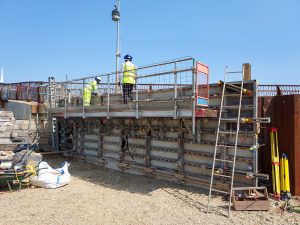 Another wall lift was completed this week to connect the rear steel pile line to the old city walls at the caponier (section of the walls near the Saluting platform at the far west of the works).  After the concrete has set and the formwork (structure built to act as mould for the concrete to be poured into) is removed, it will stand ready for the fitting of the Purbeck limestone masonry later in the year. 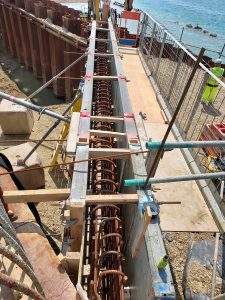 The picture shows the extent of the steel reinforcements for the wall which will be encased in the concrete pour.  The  properties of concrete and steel compliment each other; concrete gives compressive resistance whilst steel gives tensile resistance. (Compressive being pressing, compacting forces on an object and tensile being stretching forces acting on an object) 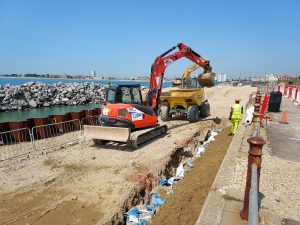 Ongoing from last week is the work to the sub base of the new promenade on the eastern side of the Spur Redoubt, approaching Clarence Pier. We are excavating and replacing the existing base with a more consistently sized material than the existing fill to create a more stable and long lasting walkway. 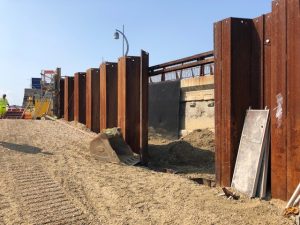 We have  created space for installation of the western egress steps  by removing a section of the above ground pile line.  The steps will be a reinforced concrete structure and will be completed later in the summer months

With the old sea defence almost all removed, the next stage of marine work kicks off again at the end of the week, with the continuation of weekend working.  The anorthosite rock which is currently being stored on the foreshore at the east will be moved and placed to its final position in front of the front pile line on the west of the Spur Redoubt.