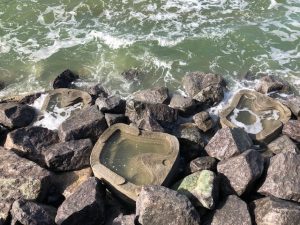 It’s always exciting to make a positive impact to the natural environment. This week saw us install the first six of 18 tide pools to the east of Spur Redoubt to provide new habitats for marine life. We will be monitoring developments and look forward to sharing updates.

Liamare, the coaster shipping rock to Southsea from Norway can be seen anchored in the Solent again for the final delivery stage of 11,000 tonnes of anorthosite rock. This type of rock has a density of more than 2.6t per m3, making it incredibly heavy and durable – key characteristics for rock armour defence as it will dissipate the force from waves to the shore. 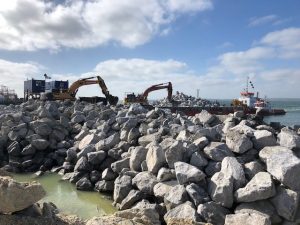 To ensure the rocks are stable for years to come, they are placed on a hardwearing geotextile layer which prevents smaller sediments underneath displacing and causing movement. Rocks from the previous delivery were placed this week and now stretch at least 40 metres from Clarence Pier.

With fair weather prevailing, work on the pile (steel sheets) lines progressed well this week – so much so that both front and rear pile lines have reached around the Spur Redoubt!

Works continuing from previous weeks include the waling beam on the rear pile line (the waling beam secures into the steel sheet piles to anchor them in place) and drainage for the new promenade. 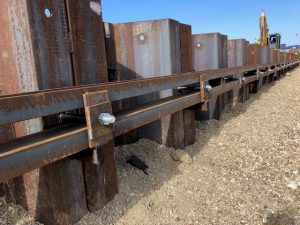