In the next couple of weeks we will be building a temporary access road for construction vehicles along the bund on the eastern perimeter of Castle Field. This will be a discreet route along the edge of the field nearest the Pyramids, with the majority of the field still being accessible.

We took an adventure to tunnels underneath Southsea Castle this week. It’s not as glamorous as it looks from the photos, with plenty of dark corners and cobwebs to contend with!  Its good to get an inside look into an important historic landmark, especially as it is one of the structures that the Scheme is being built to protect.

Powering up the parapets 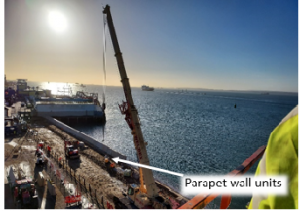 We have now installed 28 of approximately 50 units on the east side of the works. It’s great to see this part of the project continuing at a good pace. 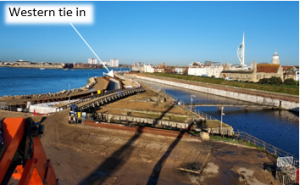 Tackling the tie in

Out at the west we are installing the pre cast units at the tie in wall (wall linking the steel pile wall with the existing wall) in preparation for allowing crane access to the footbridge. We are hoping to remove the bridge in the coming weeks ready for a similar replacement structure.