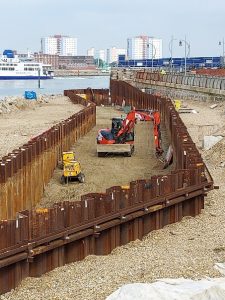 What a winning week! We were named runner up in the NEC Awards ‘Client of the Year’ category, followed by being honoured in the top five of the ‘People’s Choice’ category in the SECBE Constructing Excellence Awards for our heritage maintenance work on Long Curtain Moat. A great achievement, given there were 76 finalists in the running! Oh, and there was that other win…something about a football game…

Meanwhile, back behind the hoardings with those winning football smiles, we have a celebration of our own. The toe beam on the steel pile wall to the east of the Spur Redoubt is now complete!

To the west of the Spur, we continue onto bay six of eight.  Section by section, digging out, attaching beams and blinding and backfilling once complete. The waling beam on the rear of the front pile line provides stability and support to the steel piles, whilst the toe beam on the front of the rear pile line provides the same stability as well as a base for the precast vertical wall. 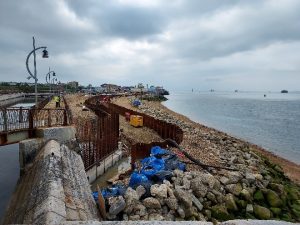 Preparation for moving the anorthosite rocks currently stored on the beach to the east has begun.  Next week we will start placing the rocks on the west side of the Spur, against the steel pile wall.  This creates the rock revetment which acts to absorb power from waves to protect against flood waters.

Let’s face it, this week the real big news was England beating Germany 2 – 0. Come on England!