Check out the below photo, showing completion of concreting to the top of the western egress (emergency exit) stairs at Long Curtain Moat. We do love an arty shot! 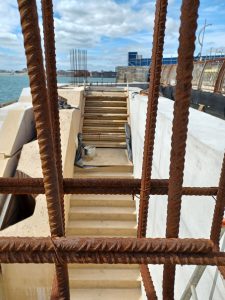 More pre-cast ‘specials’ have arrived on site at Long Curtain Moat! The bespoke corner sections of the defences are being installed as the works progress around the Spur Redoubt. Why are they called ‘specials’, you may ask. Well, it’s because they’re non-standard units ‘specially’ designed to go around the bends of the defences! Work has also started on the promenade walkway around the Spur and the incorporated historic structures. 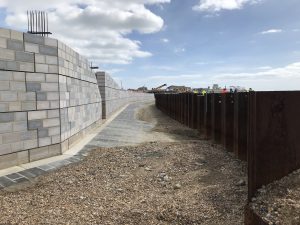 We’re working to improve drainage on the Bandstand Field, setting up a drainage line from the rock defences to the field. 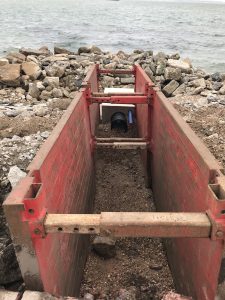 We’re importing 140,000 tonnes of rock to build flood defences in the area between the Pyramids and Blue Reef Aquarium. If you want to see the work taking place you can stand by Southsea Castle for a great view – or just click on the fantastic drone shot below! 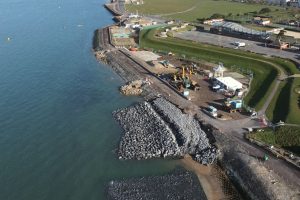