Down at the (anortho) site 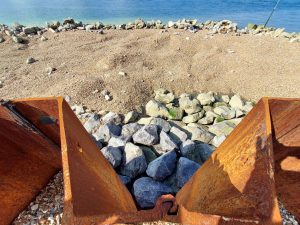 The work placing the Norwegian anorthosite rock rolls on at site this week. This rock was chosen specifically for its density to create a long-lasting flood defence. Weather and the tidal patterns slowed our progress a little, but nonetheless we have already placed 30 metres of the revetment (sloped structure) at the west, starting at the Saluting Platform and working towards the Spur Redoubt.

There Gonna Be Some Rock In 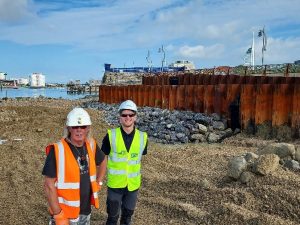 Jeff and Parsa from Boskalis Westminster show how the area for the rock is excavated and geotextile placed (a textile line for stability). The rocks are then placed tightly up to the sheet pile line, ensuring maximum protection for the wall and area behind. When the full length of the rock revetment is placed and finished, much of it will be covered with shingle to maintain the aesthetics of the area.

The end of the bay working is within spitting distance this week as we move into bay eight and toward the connection of the west and east steel pile lines. There is still blinding to finish and the toe beam on the rear pile line to concrete pour. Both should be completed next week. 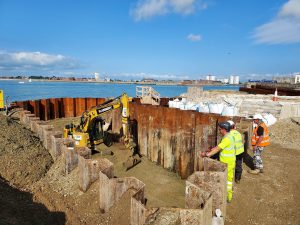