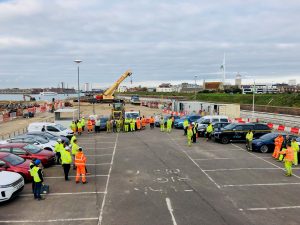 Work paused on site on 11 November as our entire team gathered in the Clarence Pier carpark at Frontage 1 to remember the fallen in a two-minute silence. Lest we forget. 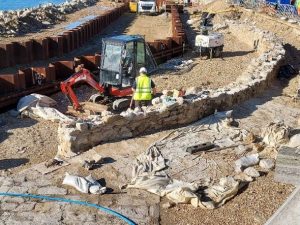 We have now completed all remedial works on the historic walls, and our thanks go to archaeologist Neil who has been monitoring works for the past two months. We have worked in close consultation with Historic England in restoring the walls to their former glory. This section of wall to the west of Spur Redoubt will be railed off but still be fully visible to visitors to the area.

The hydro demolition on the capping beam (horizontal beam on top of the old wall of the moat) is now close to finishing.  Removing this beam is part of the preparation for laying a new, wider, two tier promenade from the Spur Redoubt to the Saluting Platform.

In other news, work is progressing well with the laying of the precast units for the new sea walls. Elsewhere, the eastern egress steps are nearly finished and just need their upper steps cast, while work will start on the steps to the west next week. 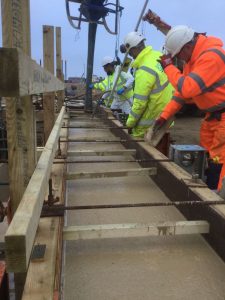 Our on-site fox (of the non-silver variety) gets cheekier by the day and can often be found sitting in the bucket of the excavator while it’s not in use! 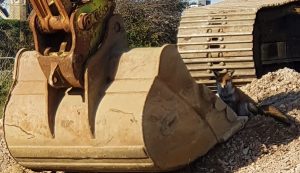 If you haven’t made it to our conceptual art exhibition yet, you have from 10am until 4pm tomorrow (13 November) to get on down to The D-Day Story to have your say on how you’d like to see public art incorporated into the Southsea Coastal Scheme.