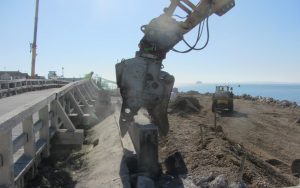 It was an archaeologist’s dream on site this week as we continued exposing the historic structure to the west of the Spur Redoubt under archaeological supervision. We removed the last remnants of the existing concrete wall adjacent to the Spur Redoubt using concrete jaws (known as a hydraulic pulveriser) which exposed further historic structure below. Stay tuned for details…

As local residents will know, this was definitely not the best week for working outdoors and, as expected, strong winds and rough seas caused a delay to our piling and concrete works.

We finished work on extending the eastern outfall pipe through the new sheet piles in order to maintain the water flow. Other works included commencing piling near the caponier (covered passage) on Long Curtain Moat.

Please be advised that from 15 March we will be working until 9pm from Monday to Thursday for two weeks at Frontage 1 (Long Curtain Moat). Minimal disruption is expected during the works which, while later than usual, are still within permitted times.

The works will entail pre-auguring activities on Frontage 1 as this will enable the piling works in this area to continue with both rigs during normal hours.