A spectacular display got underway on the Southsea shore today with a large amount of gravel being ‘rainbowed’ across the beach by dredging vessel, the Sospan Dau, as part of Portsmouth City Council’s Southsea Coastal Scheme. 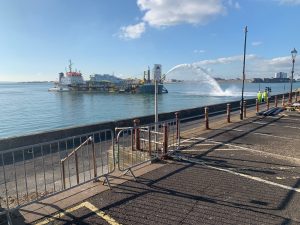 The dredger made the trip through rough waters to arrive in Portsmouth in early November, beginning its journey in Liverpool and taking five sailing days to get here.

Around 5000m3 of gravel will be sprayed via a specialised nozzle on the bow of the vessel, with the material forming an arc (or rainbow) onto the beach.

This will create a temporary working platform on the foreshore between Clarence Pier and the Spur Redoubt to enable Southsea Coastal Scheme works to proceed.

The arrival of the Sospan Dau is a major milestone for the Portsmouth City Council-led project.

Councillor Hugh Mason, Cabinet Member for Planning Policy and City Development said: “The Southsea Coastal Scheme has been a long time coming, and the arrival of the Sospan Dau is a very real indication that things are moving ahead at pace.

“This is the first real sign that the new coastal defences are taking shape. I congratulate the team for getting to this point and look forward to seeing the works progress for the benefit of the Southsea community.”

In the next 2-3 weeks, the dredger will place around 18,000m3 of material to create a second working platform between the Spur Redoubt and the Saluting Platform.

Rupert Teasdale, Southsea Coastal Scheme project manager said: “The gravel being used is material that was placed offshore from dredging the Portsmouth Harbour approach channel in 2016 and 2017 for the arrival of the new QEC aircraft carriers.

“The Scheme is focused on zero waste and aims to reuse material wherever possible – this is a prime example of our commitment to recycling.

“It complements our plans to reuse material that will be broken and excavated out of the existing structures to provide fill material for the new sea defences – avoiding sending more than 92,000 tonnes of waste to landfill.”

Rainbowing is a task that dredging vessels perform. It entails pumping materials onto the beach using a high capacity pump. The material forms an arc/rainbow shape during transit (from pump head to beach), hence the terminology.