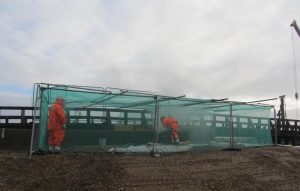 The Scheme is using specialised hydro-demolition to remove concrete to the east of Spur Redoubt, where it is in close proximity to 17th century historic walls that were recently uncovered during revetment clearance.

The method is being used to demolish concrete walls without damaging any historic fabric and is conducted under the supervision of an attending archaeologist.

Metal sheeting has been deployed to protect historic walls, as well as a netting enclosure to contain flying debris.

“Since the Southsea Coastal Scheme started in September 2020, we’ve been committed to protecting the historic discoveries that have been uncovered during our works.

“This vibration-free method is ideal for the project as it’s a very specific technique that only removes concrete from a targeted section, so it avoids damage to sensitive areas.”

Once hydro-demolition is over, the exposed remains will be covered over after being surveyed and recorded by Wessex Archaeology, in consultation with Historic England and the County Archaeologist.