Sea walls shaping up in Southsea 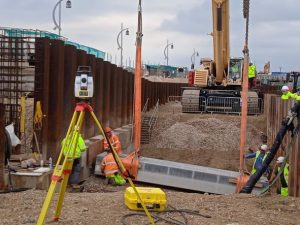 New sea defences are taking shape at the Southsea Coastal Scheme as a massive 220 tonne crane installs the first limestone and granite units that will form a wall to protect the area around Long Curtain Moat from future flooding.

In total, the crane will lift and place 88 pre-cast concrete and limestone units weighing in at 10 tonnes per unit and 114 granite slabs that each weigh 12 tonnes to the west of Spur Redoubt. 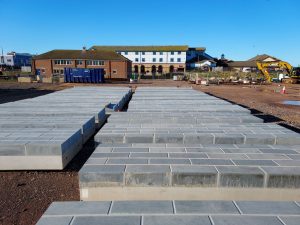 There will also be 62 parapet units installed to make up the top of the wall.

The new sea defences will fit in with the historic Long Curtain Moat area, thanks to meticulous sourcing of stone to match the original seawalls.

Materials were selected following a process known as petrographic testing that looked at samples of the original wall at Long Curtain Moat to identify its makeup in order for it to be matched to today’s equivalent material.

Granite was sourced from Ireland while Purbeck Limestone from Dorset will make up the wall cladding west of Spur Redoubt. Both materials wear well in coastal environments.

“This is great work from the Southsea Coastal Scheme because it strikes a delicate balance between building sturdy new defences alongside undertaking intricate work to preserve the rich historic significance of this area. 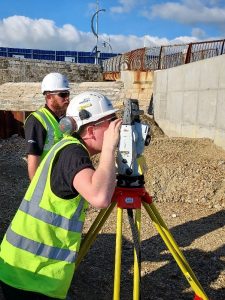 “This Scheme is going to be hugely beneficial because, without raising and strengthening the existing defences, we could well see a future Portsmouth reverting to being a morass in the wake of climate change and other factors.”

“The placement of the first units represents a huge milestone as it comes after more than a year of consultation with Historic England to ensure the stone used was the right fit in this heritage-protected area. In engineering terms, it’s also pretty unique. 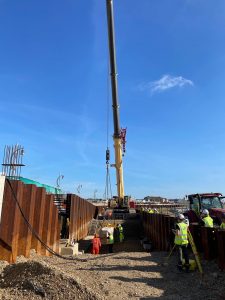 “We’re committed to working with Historic England throughout the project and will keep in close contact as we move into the next phase of the Scheme around Southsea Castle in 2022.”

Work at Long Curtain Moat – known as Frontage 1 of the Southsea Coastal Scheme – is due for completion in autumn 2022.