Spectacular shoreline scenes this week with thousands of tonnes of rock being offloaded onto the beach near the Pyramids to build new flood defences for the next phase of the Southsea Coastal Scheme. 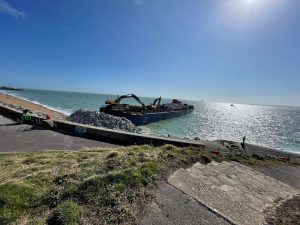 A total of 140,000 tonnes of rock will be used for the defences along frontage 4 of the Scheme, which stretches from the Pyramids to Blue Reef Aquarium and takes in the historic area around Southsea Castle.

Extremely heavy, dense rock for the defences was sourced from Norway, with weekly deliveries of around 5,500 tonnes each expected until September 2022.

“This is an exciting stage of the Scheme because the arrival of rock means the land-based work in constructing the defences can start.

“This work will generally take place at low tide from a temporary working platform that stretches out to sea, while the vessels bringing the rock to shore will come in at high tide.

“We ask for your understanding that our work is tidal-dependent so we will at times need to work outside daylight hours.

“As always, we will monitor noise throughout the works and try to minimise disturbance as much as possible.”

Throughout frontage 4 works, large construction equipment such as trucks and excavators will be working on the beach, as well as tug boats, barges and support vessels off shore.

Work is expected to be complete by spring 2024.