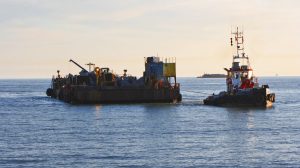 Thousands of tonnes of armour rock will arrive in Southsea by ship this month to form new primary sea defences as part of the Portsmouth City Council-led Southsea Coastal Scheme.

The first shipment of 5600 tonnes of rock is planned to be discharged onto the shore at Frontage 1 (Long Curtain Moat) from 12-15 April, with a second delivery anticipated from 19-25 April (weather permitting).

A barge and tug will transport the rock from ship to shore, where it will be temporarily stockpiled before being used to build the sea defences that will form both the east and west revetment at Frontage 1.

Construction of the east revetment will get underway first and is expected to take five weeks.

“The sheer volume of rock means we will need to be ready to work 24/7 to take delivery because this can only happen during high tide periods.

“While some night-time operations may be required, the current plan is to deliver the rock and build the revetment during extended day light hours as much as possible.

“There will be some associated noise and lighting over this time and we hope the community will understand this is necessary as we construct the essential sea defences.”

The west revetment construction is expected to commence late June and will last approximately six weeks.

The Southsea Coastal Scheme is the UK’s largest local authority-led coastal defences’ project, worth more than £100M. It will stretch for 4.5km from Old Portsmouth to Eastney, and help to reduce the risk of flooding to more than 10,000 homes and 700 businesses.