Until the beginning of the nineteenth century the area covered by Southsea was an open, flat, often marshy area, the centre of which was occupied by the octopus-shaped Great Morass (the map from 1855 shows this feature clearly).

From the 1540s the most significant building was Southsea Castle, right at the southern tip of Portsea Island, To the west Southsea was separated from the town of Portsmouth by the Little Morass and the fortifications, while to the north and east there were no obvious boundaries. When the canal was cut through from Milton to Halfway Houses early in the nineteenth century, an approximate boundary was established, whereby Southsea began south of Fratton Bridge, although the part north of Hyde Park Road (now Winston Churchill Avenue) was and is regarded as part of Landport. Eastney has generally been regarded as an eastward extension of Southsea.

The earliest housing appeared east of the (Old) Portsmouth fortifications about 1809 (Hampshire Terrace etc.) and within 100 years the whole of Southsea was developed in more or less its present form. Closely associated with the growth of Southsea is the name of Thomas Ellis Owen, who was responsible for St. Jude‘s Church and the sinuous lines of the roads in central Southsea.

The growth of Southsea seafront as a holiday resort can be traced in detail in the numerous
guidebooks published since the end of the eighteenth century. Scarcely mentioned initially,
Southsea eventually became the first name on some guidebooks.

History has shown that our seafront has seen its fair share of extreme weather in the past. In March 1818 a storm hit Southsea, bringing a five foot storm surge with it which lasted for over three hours. Buildings near the Round Tower and the platform at Sally Port were destroyed. Land around Lumps Fort was also swept away.

In 1821, a severe storm caused the sea to overtop the beach between Southsea Castle and Lumps Fort. The water reached as far as Marmion Road, which is nearly half a mile inland! 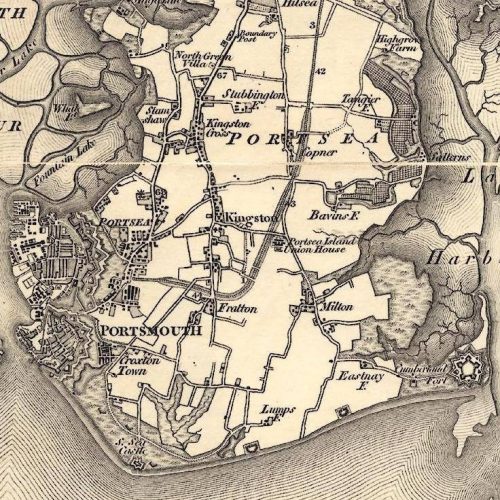