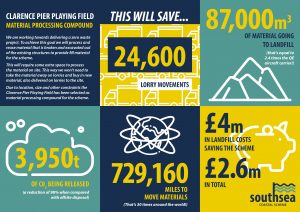 It’s Recycle Week and the Southsea Coastal Scheme is a great example of a project committed to zero waste.

The Scheme plans to reuse material that will be broken and excavated out of the existing structures to provide fill material for the new sea defences. This will avoid sending more than 92,000 tonnes of waste to landfill.

To achieve our goal, we are setting up a materials processing site on land hired from the Ministry of Defence at the Clarence Pier Playing Field on Pier Road.

The site will process and store materials recovered from the works including concrete, earth and stone. This will then be sorted with specialist equipment which will crush and grade it as required. It will then be stored on site until it can be used in future parts of the works, such as fill to raise the promenade and road on sub frontage three.

The processing site will operate in daytime work hours only and will only take materials from the Southsea Coastal Scheme. Special netting will be attached to the fence to control dust and noise.

It’s estimated that the use of the material processing site will avoid the need to spend some £4M required to throw the material away, and will avoid around 3,950 tonnes of carbon dioxide emissions and keep 24,600 lorry movements out of the city.

We are conscious that our recycling site at the Clarence Pier Playing Field has previously been used by the internationally-protected Brent Geese when they migrate from Siberia during the winter months.

For this reason, an area within Castle Field will be closed off to the public from October 2020 until the end of March 2021 in order to create a bird refuge site for Brent Geese. This area has been identified as the most appropriate site for the refuge area in conjunction with Natural England.