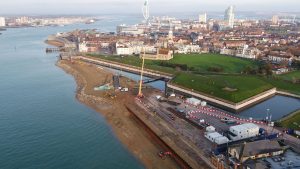 Our heritage maintenance work to restore Long Curtain Moat to its former glory has seen us nominated as a finalist in the 2021 Constructing Excellence SECBE Awards (Conservation & Regeneration category).

Coastal Environmental Engineer Rachel Cook is part of the team who entered the awards.

“Throughout the project we’ve enhanced the appearance of Long Curtain Moat using sympathetic methods such as steam cleaning with excellent results. This has received extremely positive feedback from the public and really enhances the experience of people visiting the area.”