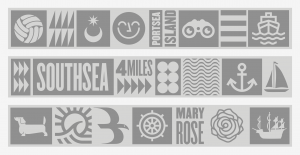 The local company has been selected by Portsmouth City Council to have its artwork incorporated into a new sea wall along 2.1km of coastline at Eastern Road as part of the NPI Coastal Flood Defence Scheme.

ilovedust was founded in Portsmouth in 2003 and is still based in the city, as well as having an office in Brighton. The company is renowned for creating inspiring and innovative work, partnering with major brands across the world such as Nike, Apple and Red Bull.

Portsmouth City Council sought applicants for the project in late 2019 via a process of advertising, social media and engagement with local and national artist groups.

Four separate design bids were received, with ilovedust standing out for a dynamic proposal that tapped into the local character of Portsmouth.

“ilovedust provided the response that was the most successful in capturing the spirit of Portsmouth and connecting the people, the city and the seascape within their designs.

“They drew on many local landmarks, as well as social or cultural references such as Portsmouth FC, the Kendall’s Aggregates yard, boating sails, nature, dogs, people, community references and distance markers.

“We know this will resonate with the local community and provide a visual reminder of the rich diversity of Portsmouth over the years.”

The images will be sand-blasted onto the completed concrete defence wall as each phase of the coastal defence works progresses over the next three years.

This will be at key locations along the wall, starting at the Sailing Club in the north, progressing past the Harvester and Great Salterns Quay to Milton Common.

Matt Howarth, ilovedust Design Director, who is leading the project along with fellow artists Jo Corcoran and Clark Spencer, said:

“It’s nice to work on a project that is very local to us. We all grew up around that area of the island and know it well, which is why I think our proposal resonated with Portsmouth City Council so much.

“We wanted to create a timeless but interesting design which showcased elements from the area, the city and its rich history. It’s something that will live beyond our lifetimes – so no pressure!”

“You will certainly notice the artwork when passing by the new Eastern Road sea defence wall.”