Further repair work is now underway at two sites along Southsea’s seafront: a stretch of promenade by the Naval memorial and at Spur Redoubt by Long Curtain Moat.

The current sea defence structures along Southsea’s seafront are at the end of their maintainable lifespan and high tides and adverse weather conditions have led to further damage.

The promenade at the Naval memorial had collapsed just before Christmas and engineers secured the site to keep the public safe. A temporary sheet pile wall had been driven into the beach to avoid further damage. A separate area in need of repair was discovered last week at Spur Redoubt by Long Curtain Moat, where parts of the limestone rock revetment had collapsed and left a cavity.

Storm Brendan hit Southsea on Tuesday night, before the repairs could be completed, and both sites suffered further damages. The cavity at Spur Redoubt has become more extensive and by the Naval memorial ground underneath the promenade has been washed away by strong waves and led to further collapses. 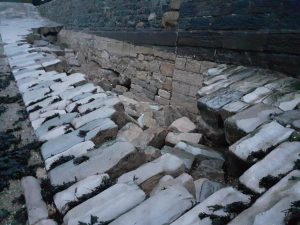 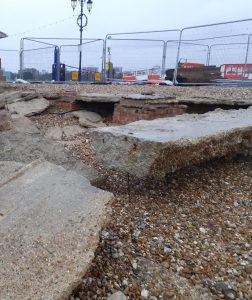 With flood and weather warnings in place Portsmouth City Council had prepared for the arrival of storm Brendan with measures such as flood gates, road closures along the seafront and officers being on site overnight to observe the tides and further developments.

These occurrences are part of a string of similar incidents over recent years and show the growing urgency in building new sea defences. Portsmouth City Council’s multi-million pound Southsea Coastal Defence Scheme to replace the existing defences is due to commence later this year.

Cllr Steve Pitt, Cabinet Member for Culture and City Development & Deputy Leader says: “Further repairs of these damages are necessary and vital in protecting Portsmouth from coastal flood and erosion risk. But the new scheme for Southsea to replace the defences has never been this urgent. Climate change does not wait for anyone and with these storms becoming more frequent and our existing defences deteriorating we must ensure no further delays.”

The scheme, which has been in development since the first consultation in 2014, has been through a wide range of consultations, information events and workshops. Various proposals have been shaped together with residents and stakeholders to produce a final design ensuring the level of protection required, whilst maintaining and enhancing the seafront. Consultations and public engagement for the finer details of the new scheme will continue throughout the delivery over the next few years. Planning permission for the scheme was agreed in December last year and once government funding is granted, work is planned to commence in early summer 2020.

Repair work will continue on both damaged sites shortly, with the aim to preserve and reuse the limestone rocks at Spur Redoubt where possible. Portsmouth City Council asks residents to keep safety in mind when walking close to construction work areas whilst these important investigations and subsequent repairs are being carried out.