The start of Phase 1 works sees the closure of the Clarence Pier Car Park for 12-18 months, with fencing going up around the perimeter and site equipment moving in.

To assist the community in adjusting to the closure, there will be weekend overflow car parking available on Southsea Common for the three weekends of 12/13, 19/20 and 26/27 September. This can be accessed via Avenue Du Caen or Clarence Parade.

Preparation for the closure of Long Curtain Moat/Clarence Pier promenade has started and a diversion route will be set up with signage in place to advise the community.

On Pier Road, the project’s site compound will be set up, starting with the erection of perimeter safety fencing and small plant and equipment deliveries.

The works are being carried out by Scheme contractor VSBW, a joint venture between VolkerStevin and Boskalis Westminster.

Neil Dorling, VSBW project manager, said: “We are delighted to be starting work on this coastal defence scheme. Throughout construction we will be considerate to the community and a customer centre will be opening later this year where we’ll have more information about the scheme and be able to answer any questions.”

Councillor Hugh Mason, Cabinet Member for Planning Policy and City Development, said: “Finally to reach day one of the Scheme’s construction is a major milestone both for the scheme itself and for the City Council as the local authority leading the country’s largest coastal defence scheme.”

Councillor Steve Pitt, Deputy Leader and Cabinet Member for Culture and City Development said: “This is a great project for Portsmouth City Council, not only for the economic benefits it will bring, but also for the way it has allowed us to engage with the community throughout some 10 years of planning. To assist the community in these early stages of the Scheme, we have organised overflow car parking on Southsea Common for the last three weekends in September as we get used to the essential closures these works entail.”

Phase 1 will occur between Long Curtain Moat and Clarence Pier and is the first of six phases. It is expected to take 12-18 months, with the entire Scheme estimated to end in 2026.

The Scheme is part of the Council’s ambitious regeneration vision to bring even more growth and prosperity to our proud and historic city. Find out more about all the regeneration plans and projects at www.portsmouth.gov.uk/regeneration 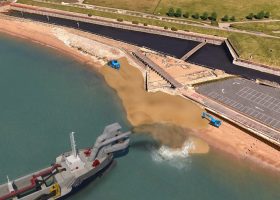 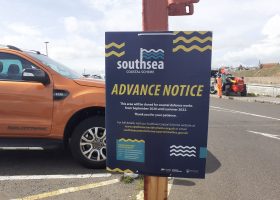