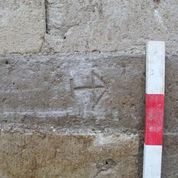 Signatures of 17th century stonemasons have been discovered on historic seawalls during work on the Portsmouth City Council-led Southsea Coastal Scheme.

Known as ‘banker marks’, the signatures were traditionally made by masons on the stones they were preparing to ensure they were paid the correct amount for their work.

Each mason had to have an individual banker mark in order to gain admission to a guild.

Banker marks were exposed on the lower levels of the seaward-facing wall of the ‘Long Curtain, Kings Bastion and Spur Redoubt’ Scheduled Monument during work to break out and remove modern concrete revetment.

“We were unaware that the banker marks existed beneath the concrete as there is no mention of them in any of the documentation about the monument.

“They have now been photographed and recorded, and will be included in a report on the archaeological monitoring and recording being undertaken as part of the Southsea Coastal Scheme.”

“This discovery has the potential to tell us whether local masons and guilds were used, or if experts such as specific military masons were brought in.

“It will help to identify which quarries or stonemason workshops were used for the stone working.

“We may well further identify the same stonemasons’ work on buildings in or around Portsmouth based on their individual marks.”