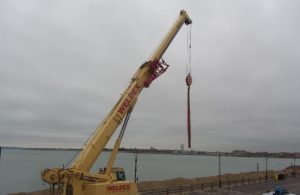 An 80 tonne crane has swung into action on the seafront this week along with a piling rig as works get underway as part of Portsmouth City Council’s Southsea Coastal Scheme.

During December, a total of 164 17.6 metre long steel sheet piles will be driven into the ground as piling works begin to provide support for the sea defences construction work.

Working from Clarence Pier towards the Spur Redoubt monument, the teams have been working at low tide to successfully install the first of the steel sheet piles.

Workers will continue extracting the old sheet piles to make way for the new sea defence structure, as well as forming a temporary embankment with broken out concrete from the old sea defences.

“The start of piling is a major milestone for the Southsea Coastal Scheme as it is the first activity that will form part of the permanent defences.

“We expect to have piling finished on the eastern section by mid-December and are working additional hours to ensure we get it done as quickly as possible to avoid inconvenience to nearby residents and businesses.

“As always, we continue to monitor noise to ensure we remain within acceptable limits and cause minimal disruption.”

During December, Southsea Coastal Scheme workers will be on site from 6am to 9pm in order to work in with the low tides, as well as on weekends where low tide times are suitable.

The piling work is being undertaken from the recently constructed working platform on the beach that was formed from dredged material ‘rainbowed’ from the Sospan Dau dredging vessel last month.

The Sospan Dau is expected to return on 14 December to place around 18,000m3 of material to create a second working platform between the Spur Redoubt and the Saluting Platform.

The Southsea Coastal Scheme is the UK’s largest local authority-led coastal defences’ project, worth more than £100M. It will stretch for 4.5km from Old Portsmouth to Eastney, and help to reduce the risk of flooding to more than 10,000 homes and 700 businesses.