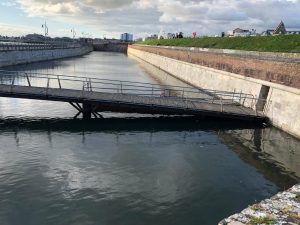 An intensive steam cleaning process over an eight-week period has seen Southsea’s Long Curtain Moat restored to its former glory.

The cleaning process was approved by Historic England and has completely transformed the moat’s inner walls, removing much of the staining to bring them close to their original white colour.

But that wasn’t the original intention of the project.

Councillor Steve Pitt, Deputy Leader of Portsmouth City Council and Cabinet Member for Culture, Leisure and Economic Development said: “Cleaning was initially only going to be undertaken along the southern moat wall as preparation for heritage maintenance works.

“However, once we saw the fantastic results from cleaning a trial area, it was decided to continue along the remainder of the moat walls to enhance the area visually for the benefit of our community.”

Steam cleaning is an effective and safe way to clean historic stonework with minimal risk of causing long-term damage.

The works were undertaken by a single steam cleaning vessel with two hose attachments. Pontoons were used to safely navigate workers within the moat.

Rupert Teasdale, Project Manager for the Southsea Coastal Scheme said: “To have enough pressure to remove any stains, the hoses had to be held quite close to the wall because each strip of stone that we cleaned was approximately the width of a smartphone.

“So it’s safe to say that this work has been time consuming and intricate – but definitely worth it for the final result.”

The works were undertaken as part of the Portsmouth City Council’s Southsea Coastal Scheme – the UK’s largest local authority-led coastal defences’ project that will help to reduce the risk of flooding to more than 10,000 homes and 700 businesses.